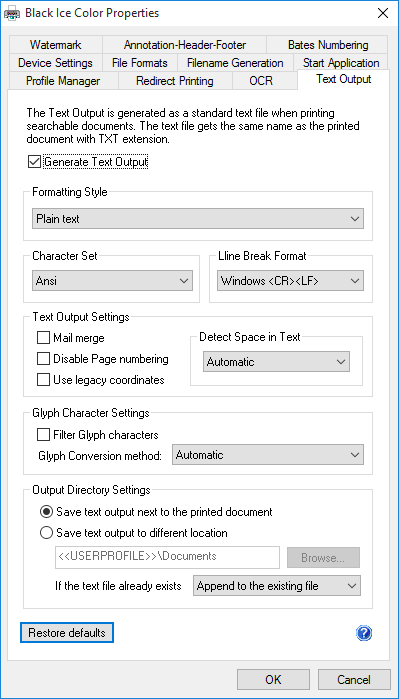 The Black Ice Printer Driver is capable of extracting the text information from the printed document.

The text extracted from the document is saved as a standard text file. The text file gets the same name as the printed document, but with the .txt extension.

The Text Output has the following features:

When Mail merge option is checked, the driver recognizes special character sequences in the printed text to extract information into an MRG file. 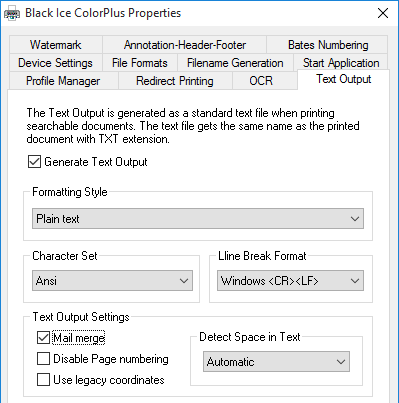 The recognized character sequences all start with the ## characters. These commands make the driver remove or alter the printed text and write it in the merged output file in text format.

Description:
The text between the ##~~ and ~~ characters will not be printed on the output document, but will be written into the MRG file. 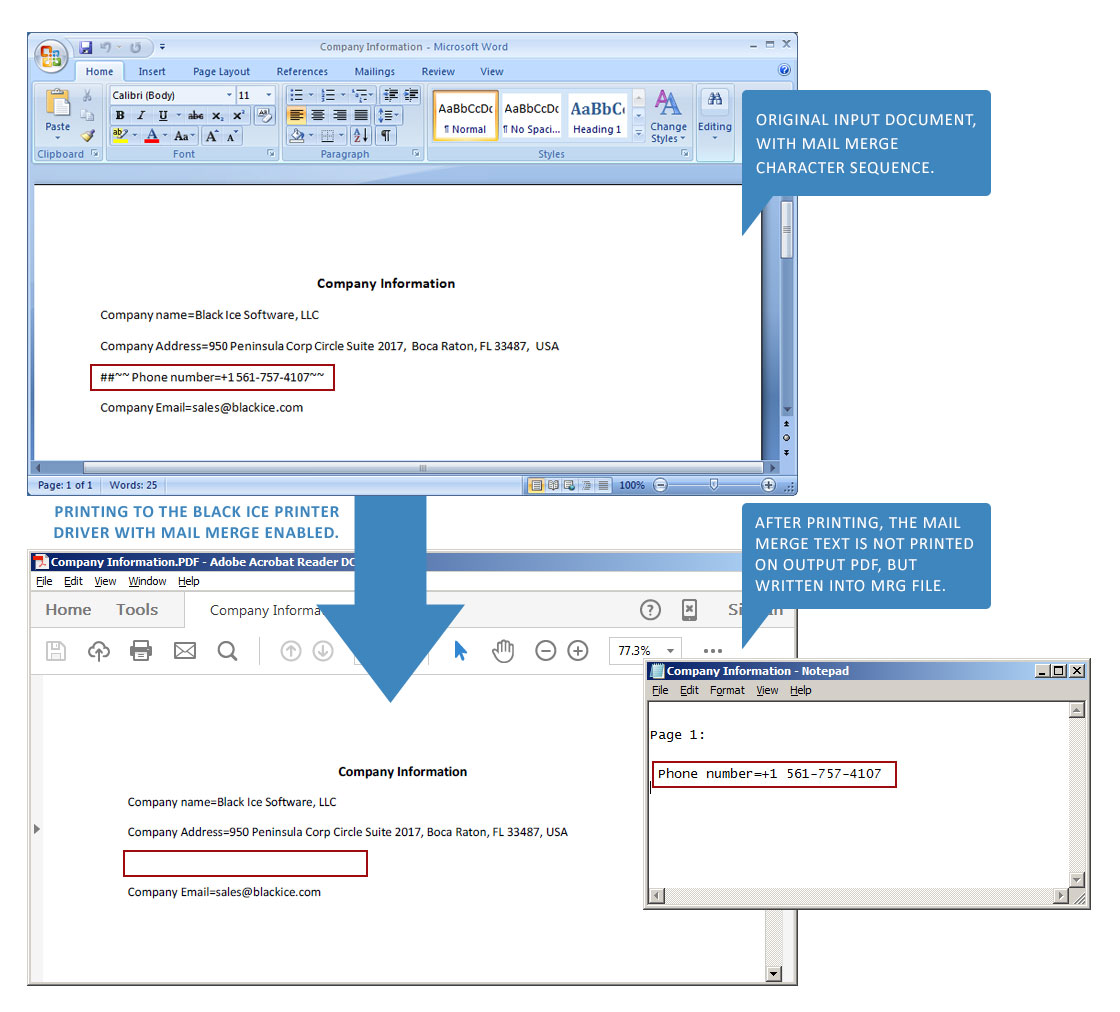 Description:
The text between the ##** and ** characters will partially printed on the output document, but will be written into the MRG file. 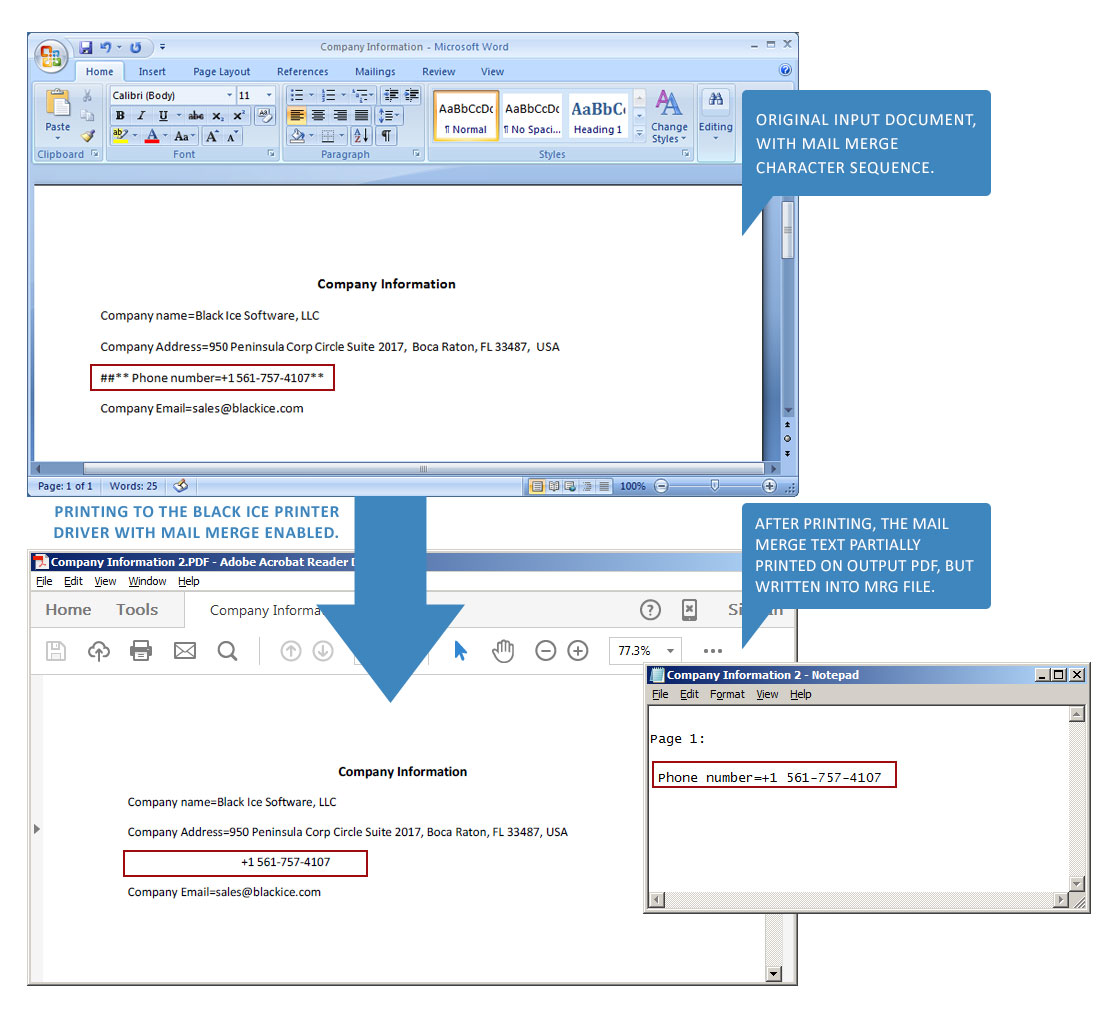 The MRG file has the same filename as the group file, with the .mrg extension. The actual name of this file is written in the group file in the following format: Merge Output=c:\aaaa1000.mrg

In addition, an output text file is generated containing the extracted text from the printed document including the mail merge characters.

All the above command lines must be printed as one continuous string from left to right. If they are printed one part at a time using several separate printing function calls (first printing ##~~ and then the rest of the line), the driver may not be able to correctly recognize them.

The application prints in segments if one changes font type or font size in the text. The mail merge string must be of one font type, the same font size and color. The mail merge file *.mrg also contains page delimiter information to mark where the new page started. The page delimiter is an empty line, the ‘Page 1:’ text (where the number is the current page number), and another empty line in the *.mrg file, for example: 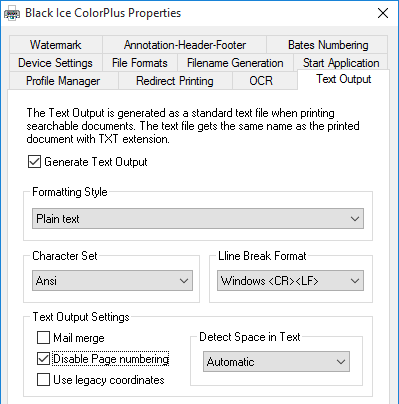 One can disable the Page number delimiters in the text output by checking Disable Page Numbering option.

The coordinate calculation has changed in printer driver version 14.35.

When the Use Legacy Coordinates option is enabled, the Printer Driver generates coordinates based on previous version of text extraction.

The extracted text coordinates with Use Legacy Coordinates option will be the same as with Printer Driver version 14.35 and earlier.

This option could be useful if one updated to the latest Black Ice Printer Driver, but insists to use the same coordinates for commonly extracted documents. 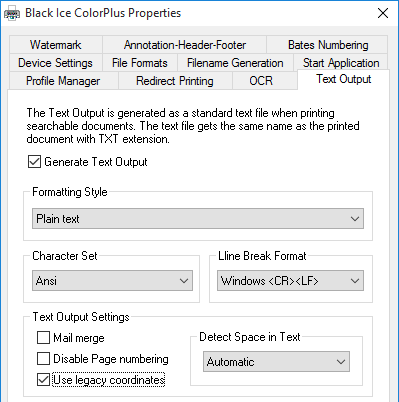 The Detect space in text feature automatically detects the space characters between the EMF records from the input document, and inserts the spaces between the appropriate words in the text output. 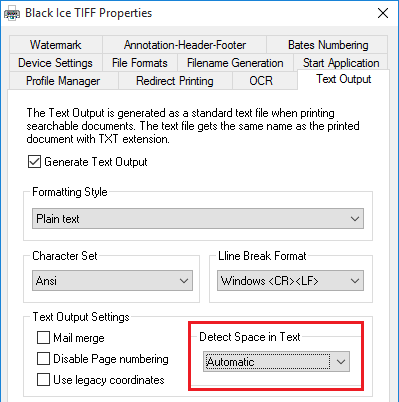 Formatting style defines whether to generate plain text from the printed document, or to add font information, position and style for the generated text. Adding position, style and font information could be useful if one intend to convert the text back to formatted document. 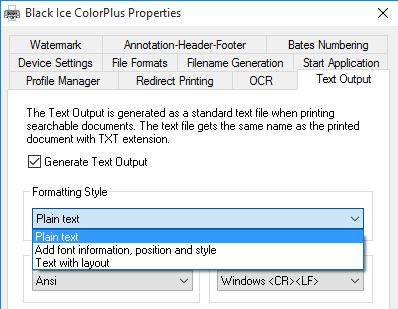 By default, the text file is generated as ANSI text, however, UNICODE text is also supported. In order to turn on the UNICODE text support, select an UNICODE option from the Character Set dropdown list. 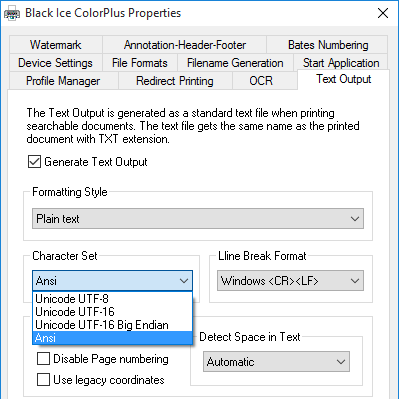 The following options are available in the Character Set dropdown list:

When a Unicode option is selected, the driver will interpret the contents of strings printed using the TextOut function as two-byte glyph indexes. Unicode option is recommended for extracting text from documents containing Unicode/eastern characters.

Line Break format specifies the format of the line breaks in the generated text output. 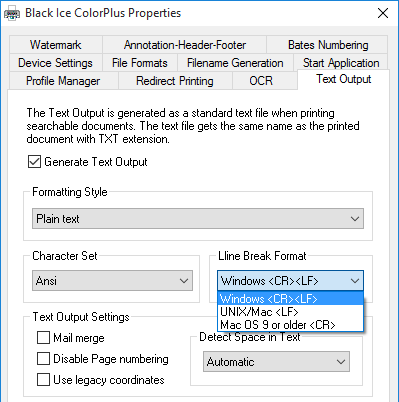 Possible values for the Line break format are the followings:

We recommend to use Windows line break format, unless if you using legacy Unix software, or Macintosh.

Filter Glyph characters option is useful for filtering out glyph symbols and characters from the extracted document. 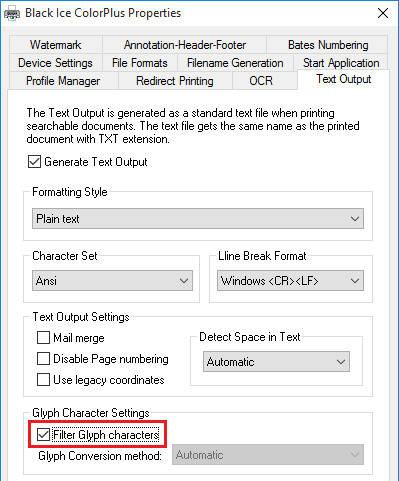 Some text is passed by the printing application to the printer driver as a series of glyph indexes of a font instead of regular characters. If this value is set to 0, the printer driver tries to convert these indexes to characters using the method defined by the “Glyph Conversion Method” value, but this is not guaranteed to work every time and may result in glyph characters appearing in the text output.

The purpose of the glyph conversion method is to attempt to convert the glyph characters to proper text. 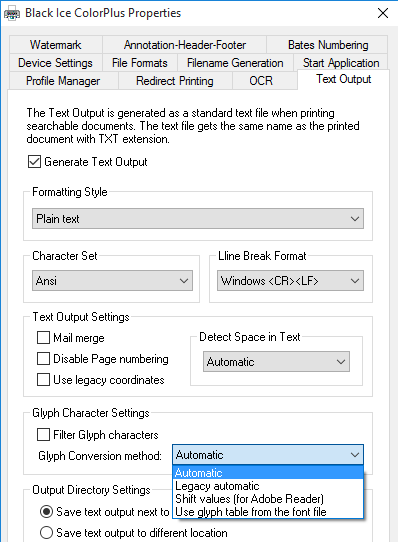 The possible values are the followings:

One can configure where to save the Text Output generated by the Printer Driver. By default, the text output will be generated next to the printed document. 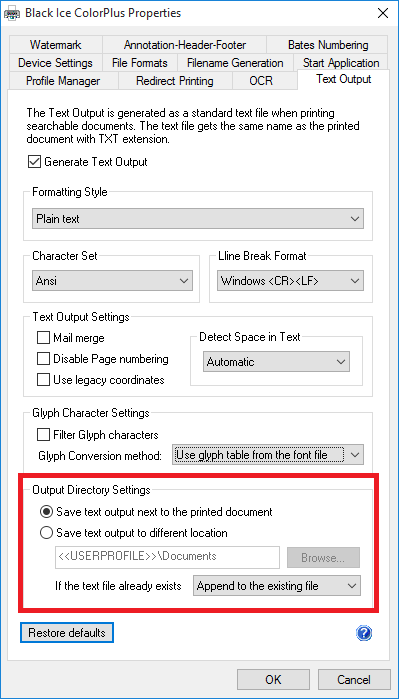 The possible options are the followings:

The Extract Text feature is included in the following Black Ice printer drivers: